Ok, so I'll be the first to admit that this isn't the typical first step on the path to an early retirement.  And I wouldn't recommend it as a first step in most cases, but this is how the cards fell.  But step one of The Plan I am using to get to my early retirement in Maine was buying a place to land when I get there.  Here's how that came about...

After I divorced, I had a lot of time alone to reflect and really find myself (cheesy as that sounds).  I considered what was truly important to me and where I saw my life going.  I had no interest in keeping up with the Joneses, much less the Kardashians.  I enjoyed spending time with the kiddo, particularly our yearly trips to Maine.  And I really enjoyed hiking, especially in the Maine woods.  And I missed small-town living.  Can you guess where my ideal town was?

As I previously mentioned, my parents had a camp in Maine.  A couple of years after I got divorced, my parents decided that they wanted to sell the camp so that they could move closer to where my kiddo and I currently live.  They preferred to transition slowly from living up there during the summers if at all possible.  They also wanted to give me first crack at buying the camp since they really wanted to keep it in the family, and I was the only one who showed any interest in actually going there.  My siblings prefer warm weather like normal people, I guess, and aren't exactly the hiking type.

I was already in pretty good financial shape since I have always been a saver, and when I divorced I downsized rather than maintain the much-too-large marital house, so my mortgage obligations were pretty low.  My parents were kind enough to offer me a gift of equity to cover the downpayment, so upfront costs would be low.  After running the numbers many times, and thinking back to how my dad regretted not buying his father's camp when he had the chance, I went for it.

Closing on a house, even an all-family sale, isn't a simple process.  You still have to get inspections and appraisals done, line up insurance, and sign stacks of paperwork.  After a month-long process, I became the proud owner of my future retirement home - a 900-something square foot, 2 bedroom, 1.5 bath cottage on a pond in a town of less than 1000 people. 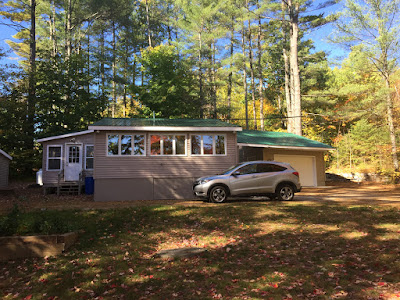 Of course, a second home is a lot of money no matter how you slice it.  My mortgage obligations suddenly increased by about 80%.  That said, it was manageable because when I downsized after the divorce, my mortgage dropped considerably, so I after adding the second place I was back where I started mortgage-wise.  Since I hadn't allowed my lifestyle to inflate to fill that gap, I didn't really feel the difference.

There is, of course, an opportunity cost at play here though.  I could be investing that extra money instead of paying a second mortgage.  Would I get to financial independence faster without the camp?  Absolutely.  But I would get there without a place to land, and wherever I landed would not come with a nice family discount (in the form of a gift of equity), the memories of all the time spent there already, and the ability to help my parents move closer to their youngest grandkid.  I consider that a fair trade - your mileage may vary.

On pure financial independence blogs, delaying for something as silly as a house on a pond is likely a cardinal sin.  I should be happy living in a van down by the river.  But there is another force at play here - the kiddo.

I've mentioned the kiddo a few times now.  His importance to me cannot be overstated.  And because of that, and the great co-parenting relationship I have with his mom, I am staying where I live in Virginia until he graduates, which happens to be ten years from this post.

So while I would love to be in Maine right now, even if I retired today I would be staying put for ten years anyway.  Since I actually like my job I'm okay with that.  This is fortunate because the stars and math seem to have aligned and decided on this ten year number for me.  Check this out:


Stay tuned for step 2.  That's where the fun really begins.

Note:  Yes, I know the cost of an AT thru-hike will likely increase in ten years, and the likelihood of the house selling for exactly what I paid for it is very slim.  But that's a pretty cool coincidence, right?
Posted by Jeff at 10:10 AM

Email ThisBlogThis!Share to TwitterShare to FacebookShare to Pinterest
Labels: Maine, The Plan